For Episcopalians, worship is both how we express and how we experience our identity as Anglican Christians, and how we deepen our relationship with God in Christ. This perspective is summed up in the Latin phrase, lex , lex credenda ―the law of prayer is the law of belief, which can also be stated, how we pray is how we believe.

Our worship is framed and guided by the Book of Common Prayer, which includes public rites of worship (known as liturgy), the calendar of holy days and commemorative feasts, the Psalter (all 150 psalms in the Bible), prayers and thanksgivings, the Catechism (also known as the Outline of the Faith), the lectionary (which specifies Scripture readings for a three-year cycle), devotions, and historical documents of the Church. 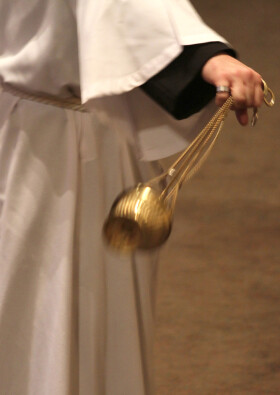 The primary liturgy, or worship rite, for is the Eucharist, also known as Holy Communion, the Lord's Supper, or Mass. In the Eucharist, we offer ourselves to God's service, receive forgiveness for our sins, and unite with Christ and one another in receiving the sacrament of Christ's body and blood in the consecrated wine and bread. All baptized Christians are welcome to receive the sacrament.

Worship in the Anglican tradition is a richly textured experience, combining prayer, proclamation, vocal and instrumental music, ritual movement, vestments, and liturgical symbols and fixtures. Above all it is participatory: the congregation, the assembly of worshippers, joins in the prayers, psalms, and hymns; and exercises leadership roles in the liturgy as readers of the Scripture (lectors), as ushers and greeters, as acolytes, as choir members and musicians, as leaders of prayers, and as chalice bearers during the Eucharist. Lay people may also be licensed to preach, and commissioned to take the Eucharist to homebound persons.

The rite of Eucharist has two parts: the liturgy of the word which focuses on collects (a general prayer offered by the presider usually at the beginning of the liturgy), the prayers of the people, canticles and anthems, passages from the Old and New Testaments, a sermon, the general confession, and the exchange of the Peace (derived from the Hebrew greeting shalom); and the liturgy of the table which focuses on the sacramental action of the Eucharist: the invitation to the people (the sursum corda), the recitation of the (an invocation), the Eucharistic prayer including the consecration of the bread and wine, the recitation of the Lord's Prayer, the fraction (breaking of the consecrated bread), and the offering of the consecrated elements to the congregation. The rite ends with a prayer of general thanksgiving and dismissal.

In addition to the Eucharist, The Book of Common Prayer includes the Daily Office (Morning Prayer, Noonday Prayer, Evening Prayer, Compline); daily devotions, and specific sacramental rites for baptism, confirmation, and ordination, and pastoral rites (marriage, ministration to the sick, reconciliation of a penitent, and burial) as well as liturgies for the church's primary celebrations during Lent and Easter. 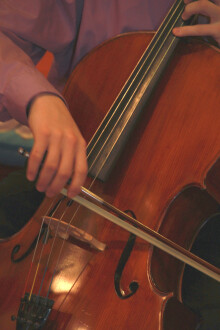 All our senses are incorporated in the liturgical life of The Episcopal Church through the visual array of altar frontal cloths, banners, candles, crosses, stained glass, and vestments; through burning of incense and the perfume of flowers and evergreens; through the tactile experience of consuming bread and wine, and turning the pages of the prayer book and hymnals; and through the words proclaimed in the sermon and readings, and in the anthems, hymns and instrumentals offered by musicians and choirs.

Music is an integral part of the worship experience in The Episcopal Church, and encompasses a wide diversity of styles and applications, from pipe organs to electronic keyboards, and from choral cantatas to hip hop.

In a typical service, music is employed for the prelude, the opening or processional hymn, the gospel anthem, the offering, the , the administration of communion, and the closing processional hymn. Other points where music is used include the canticle and psalm during the liturgy of the word, the fraction anthem after the Eucharistic prayer, and a post-communion hymn.  Some liturgical rites are designed specifically around music, namely Evensong and the Festival of Lessons and Carols (during Advent and Christmas).

Music resources for worship include The Hymnal 1982; Lift Every Voice and Sing II; Wonder, Love Praise; Enriching our Music (with canticles and settings for Eucharist); Together in Song (Australian hymn book); and the Gather hymnal (published for use in the Roman Catholic Church).

Most recently revised in 1982, The Hymnal of The Episcopal Church offers 720 hymns in addition to liturgical music. While some of the hymns date back to monastic chants, the hymnal offers more modern music as well. Lift Every Voice and Sing II (LEVAS) is a collection of 280 musical pieces from both the African American and Gospel traditions has been compiled under the supervision of the Office of Black Ministries of The Episcopal Church. The general editor was the late Dr. Horace Boyer. LEVAS includes service music and several psalm settings in addition to the Negro spirituals, gospel songs, and hymns. Wonder, Love Praise is the second supplement to The Hymnal 1982 and offers an eclectic collection of two hundred hymns, songs, and spiritual songs including a large selection of service music and devotional pieces.