About The Episcopal Church

The Episcopal Church is one of 38 self-governing churches, or provinces, which make up the worldwide Anglican Communion. The Communion’s provinces are national and multinational, operating from 165 nations on all seven continents. They are linked by their proclamation of the Catholic and Apostolic faith; their common ecclesiastical (church order or governance) structure, including the historic episcopate; their theological grounding in scripture, tradition and reason; their use of liturgies derived from The Book of Common Prayer; their recognition of the Eucharist as the central act of worship; and through their ties to the Archbishop of Canterbury who serves as the primate (primary leader) of the Church of England and spiritual leader of the Communion.

The Episcopal Church came into being in 1784 through the consecration of its first bishop, Samuel Seabury, by bishops of The Episcopal Church of Scotland. The formal establishment of The Episcopal Church came in 1789 with the church’s first General Convention and adoption of its constitution and canons. The General Convention is the primary governing authority in The Episcopal Church and — because of the church’s origins — reflects the structure of the U.S. Congress. The Convention is composed of a House of Deputies (lay and ordained deputies from each diocese) and a House of Bishops (all active and retired bishops). The Convention meets every three years to enact legislation, elect representatives to its governing boards and agencies, issue statements on matters of public policy and faith, and strengthen fellowship between its members and its Anglican, ecumenical and interfaith partners.

The president of the House of Bishops — known as the Presiding Bishop — also serves as the chief executive of The Episcopal Church, which is officially incorporated as The Domestic and Foreign Missionary Society. The Episcopal Church headquarters is located in New York City, but there are field offices in Washington D.C. (Office of Governmental Affairs); and New Bern, North Carolina (Office of Pastoral Care). As of 2005, The Episcopal Church numbers 2.4 million members worshiping and witnessing in 7,680 congregations organized in 109 dioceses and three regional areas in the United States, and in 16 other countries in Central and South America, the Caribbean, Europe Asia.

The Most Rev. Michael Bruce Curry currently serves as the church’s presiding bishop. He was elected at the 2015 General Convention and installed as 27th presiding bishop and primate on November 1, 2015. 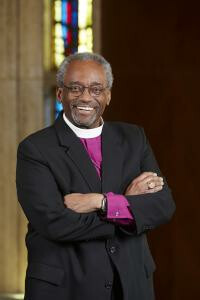 The Five Marks of Mission, developed by the Anglican Consultative Council and endorsed by the General Convention,  serves as a template for developing, adapting and funding programs in The Episcopal Church and the Diocese of Milwaukee:

To proclaim the Good News of the Kingdom
To teach, baptize and nurture new believers
To respond to human need by loving service
To seek to transform unjust structures of society
To strive to safeguard the integrity of creation and sustain and renew the life of the earth

The Diocese of Milwaukee is part of the Province of the Midwest (Province V), an association of Episcopal Church dioceses in the Midwest region working to advance the Church’s mission through regular consultation, mutual support, formation and development, and sharing in the governance of the Episcopal Church.

One of nine geographical provinces of the Episcopal Church, Province V covers most of six states (Illinois, Indiana, Michigan, Missouri (eastern), Ohio and Wisconsin, within which are 14 dioceses. These 14 dioceses are home to over 220,000 and and 844 congregations.